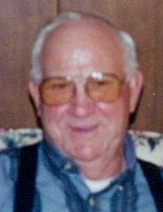 Lyle R. “Jack” Oesterle, 94, of Washington passed away at 7:23 a.m. on Thursday, March 11, 2021 at Morningside of Washington.
He was born on May 12, 1926 in Peoria, IL a son of George E. and Elizabeth Oesterle. He was the youngest and last surviving of eight children: Margaret, Edith, Art, George, Mildred, Emaline and June. Jack married Shirley J. Sturm in 1948. She passed away in 1997 after almost fifty years of marriage.
Survivors include his children, Robert T. Oesterle of Ft. Mill, South Carolina; John E. (Marsha) Oesterle of Eureka; Mary E. Wilkas of Thompsonville, IL; He leaves his best canine buddy Ted; eight beloved grandchildren; 24 great grandchildren and many special cousins, nieces and nephews.
He was preceded in death by his parents and one special friend, Marilynn J. Christian in 2016.
Jack was employed for over 43 years at Keystone Steel and Wire and after retiring he enjoyed traveling yearly to Florida and visiting friends and family.
He served in the U.S. Navy from 1943-1947 during WWII and was awarded service metals, ribbons and insignia for the European Africa arena, Asiatic Pacific and America area and the Victory and good conduct medals.
Special thanks to the nurses, CNAs and staff at Morningside, and to Vitas Hospice for their kindness and care of Jack in his last months.
Graveside services will be held on Monday, March 15, 2021 at 12 noon at Swan Lake Memory Gardens in Peoria where military rites will be accorded at the grave. Chaplain John Sipf will officiate. Argo-Ruestman-Harris Funeral Home in Eureka is handling arrangements for the family.
Memorial contributions may be made to St. Jude, Veterans of Foreign Wars or Any local animal shelter. Online condolences may be sent to the family at www.argoruestmanharris.com.

To send flowers to the family or plant a tree in memory of Lyle R. "Jack" Oesterle, please visit our floral store.

To send flowers to the family in memory of Lyle Oesterle, please visit our flower store.