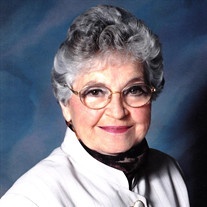 Margie H. Beck of Eureka, IL passed away on October 1, 2015 at 3:45 am at the Apostolic Christian Home of Eureka where she was a resident.

Survivors include two sons, Richard (Pat) Beck of Louisville, KY; David (Jean) Beck of Bourbonnais, IL; one daughter, Cheryl Beck with whom she made her home in Eureka, IL. She is also survived by 7 grandchildren and 11 great grandchildren.

She was preceded in death by her parents, three sisters, and one brother.

She graduated from Culver-Stockton College in Canton, MO with a degree in English and Psychology. She taught school in Canton, MO and retired as librarian at the Canton Public Library.
After retirement, she and her husband returned to Eureka, IL to be close to their children and grandchildren. She was a member of the Eureka Christian Church where she served as an Elder and co-taught a Bible Study Group with her husband for a number of years. She was a member of CWF and NSDAR. When she was able, she volunteered at Maple Lawn in RSVP and also with teaching adults to read.

A graveside service will be held at Olio Township Cemetery on Saturday, October 3, 2015 at 2:00 p.m. Her son, Richard Beck will officiate. Argo-Ruestman-Harris Funeral Home in Eureka is assisting the family with their arrangements.

In lieu of flowers, memorials may be made to the Eureka Christian Church. Online tributes and condolences may be sent to www.argoruestmanharris.com.

To send flowers to the family or plant a tree in memory of Margie Helen Beck, please visit our floral store.

To send flowers to the family in memory of Margie Beck, please visit our flower store.