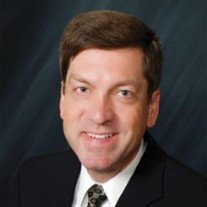 He was born on September 23, 1960 in Louisiana, MO the son of Rev. Dale and Marjorie Smiley Scott. He married Andrea Wilson on September 29, 1984 in Eureka. She survives.

Also surviving are his children, Alyssa (Galen) Rocke of Morton, IL; Derek Scott (Colleen Hogan) of Eureka, IL; one sister, Melanie Shipp of St. Louis, MO; his mother and father-in-law, Shirley and Gilbert Wilson of Eureka; sister-in-law, Chris (Ron) Schmidgall of Eureka; brother-in-law, Dean (Diana) Wilson of Hanna City; his pet dog, Tippy; and many nieces and nephews whom he was very fond of.

Mark attended Worsham College of Mortuary Science and began a career as a funeral director serving for 20 years. He first worked for Otto-Argo Funeral Home in Eureka before going to Davison-Fulton in Peoria. He then worked for 15 years for Irwin Chapel in Granite City, IL. Later he began his career as a financial agent for Country Companies. He worked from his office in Eureka for the past 15 years doing business as a Country Financial agent.

He was very active in many capacities in the Eureka community. He was an Eagle Scout, member of Masonic Lodge Triple 835 in Granite City, IL and a Shriner. He also served as a past member of the Kiwanis and was a former PTA president and Eureka Area Swim Team president. He was currently the president of the Eureka Rotary Club, a Eureka Business Association member, and served on the board at the Heart House in Eureka.


Mark was a huge Green Bay Packers and Chicago Cubs fan. He enjoyed vacations and game nights with his family and children. He loved to work in the yard and care for the birds with his bird feeders. He touched the lives of many both personally and professionally and will be dearly missed by all who knew him.

He was a member of the Eureka Christian Church where funeral services will be held at 10:00 am on Saturday, May 6, 2017. Rev. Jennie Churchman will officiate. Visitation will be held Friday from 3-7 pm at the church. Burial will be in Olio Township Cemetery. Argo-Ruestman-Harris Funeral Home in Eureka is handling arrangements for the family.


To send flowers to the family or plant a tree in memory of Mark A. Scott, please visit our floral store.

Please click here to view the video tribute
To send flowers to the family in memory of Mark Scott, please visit our flower store.