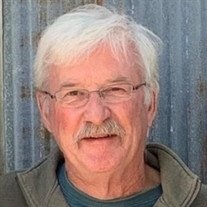 Washington - Mark D. "Farmer" Wertz, 66, of Washington, IL formerly of Eureka, IL, passed away peacefully at his home at 11:36 am on December 17, 2020. His beloved girlfriend, Deb Schumacher, his brother Tim & his mother Joanne by his side. Listening to ‘Hotel California' by the Eagles helped bring him to peace.

He leaves behind his two daughters, Nichole (Michael) Schacherbauer and Jennifer Wertz whom he shared with his former spouse Diane. His two grandchildren Brayden (9) and Lexi (6) Schacherbauer were the center of his world.

Also surviving are his mother, Joanne Book; his sisters, Kathy (Gene) Butler; Connie (Jeff) King; and his brother Tim; all of whom took care of him around the clock during his last few months of life. An act of love so deep it deserves to be publicly recognized.

He is preceded in death by his father, Spencer and his brother Mike Wertz.

Mark lived for adventure. He truly lived each day like it was his last & was always up to something. (Usually no good). He was a leader not a follower, ambitious in everything he did but still marched to the beat of his own drum.

At his request, he will be laid to rest among the mountains of Colorado.
Rather than hosting an intimate visitation, his daughters are requesting letters of condolences, sharing your favorite memory(ies) of Mark, and how he impacted your life. Pictures are welcomed. Please address your cards/letters to: Nichole & Jennifer, PO Box 46, Benson, IL 61516. Please include a return address label.
A celebration of life with close friends and family members will be scheduled for another time.

Memorial contributions may be made to a charity of the donor's choice. Online condolences and tributes may be sent to the family argoruestmanharris.com.

To send flowers to the family or plant a tree in memory of Mark Wertz, please visit our floral store.

To send flowers to the family in memory of Mark Wertz, please visit our flower store.