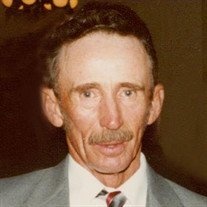 He was preceded in death by his parents and one brother, Jim Knapp in 1990.

Marvin was a lifelong farmer in the Goodfield/Congerville area. He farmed with his brother until his passing. They did custom work for other farmers in the area for many years. He also was involved with showing purebred Angus cattle, going to shows all across the country. It was his desire to remain at home with his family until the time of his passing.

Funeral services will be held at 10:00 a.m. on Saturday, February 13, 2016 at the Goodfield Apostolic Christian Church. Church ministers will officiate. Visitation will be held from 9-9:45 a.m. on Saturday before the services at the church. Burial will be in the Goodfield/Congerville Apostolic Christian Cemetery. Argo-Ruestman-Harris Funeral Home in Eureka is handling arrangements.

Memorial contributions may be made to the Goodfield Apostolic Christian Church. Online condolences may be sent to the family at www.argoruestmanharris.com.


To send flowers to the family or plant a tree in memory of Marvin "Muck" Knapp, please visit our floral store.

To send flowers to the family in memory of Marvin Knapp, please visit our flower store.