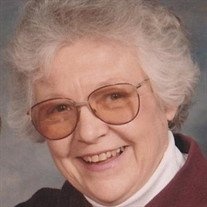 Mary Ann Carlson, 82, of Bloomington, IL died in the loving care of OSF hospice at the Eureka Apostolic Nursing Home on Aug. 7, 2015. Mary Ann was the youngest daughter of S. Horace and Mayme Ellenberger, born November 30, 1932 in Gridley, IL. She married Francis "Fritz" Carlson August 19, 1956 having met while they were working at General Electric in Bloomington. Mary Ann and Fritz have three surviving children, Ned Carlson of Beloit, WI/ Crawley, West Sussex, UK, Nan Carlson (Brenda) of Normal, IL; and Sue (Paul) Murphy of Edwardsville. Grandchildren include Matthew (Cassie) Carlson, Elissa Alwes, Tucker and Tanner Carlson-Huber, and Drew and Erin Murphy. Mary Ann's sister Jane Gramm and brother, Joe (Pat) Ellenberger also survive.
Her husband, parents, oldest brother, Larry Ellenberger, and brother-in-law Herb Gramm preceded her in death.
Mary Ann was active in her community throughout her life, including volunteering with the Bloomington-Normal Newcomers, Zonta Business Club, Bloomington-Normal History Club, PEO, Illinois Symphony Orchestra Guild, the Challenger Learning Center, and the David Davis Mansion. Although she started her college education at Eureka College, she left early to work at GE, eventually finishing a degree in interior design. With this education she began working at Knight's Shoppe and Ensenberger's, eventually buying her own business in window treatments, known as Spring Crest Draperies. Additionally, she was able to apply her skill and ingenuity toward the expansion of the 1st United Methodist Church of Normal, of which she was a member.
In addition to be a loving mother, Mary Ann enjoyed sewing and home decorating, collecting antiques, golf, tennis, playing bridge with friends, and traveling with Fritz. One of the groups she and Fritz enjoyed most was a gourmet group established during the mid 1970's. This group continued for over a decade, celebrating culture, food, history and a great deal of humor. These friendships have been a staple and model for their children to appreciate. Mary Ann lived with the effects of Parkinson Disease for almost 15 years. Throughout, she was always gracious and patient with those trying to help. She benefitted greatly from the services of specialists in both Milwaukee and at Washington University Movement Disorders clinic in St. Louis. Her children, extended family and friends will miss her but find solace in knowing that she is no longer bound by the restrictions of her physical body.
Donations can be made in Mary Ann's name to the Parkinson Foundation (Parkinson.org), the David Davis Mansion, Bloomington, IL, the Illinois Symphony Orchestra, or your choice.
A celebration of life event will be held on Sunday, August 23, at 2 pm at The Vrooman Mansion, 701 E. Taylor St. Bloomington, IL. Argo-Ruestman-Harris Funeral Home in Eureka is assisting the family with their arrangements. Online condolences may be directed to the family at www.argoruestmanharris.com.

To send flowers to the family or plant a tree in memory of Mary Ann Carlson, please visit our floral store.

To send flowers to the family in memory of Mary Carlson, please visit our flower store.