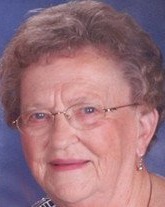 She was born on December 1, 1931 in Eureka, IL a daughter of Melvin and Grace Boughton Hewitt. She married Stan Wertz on June 16, 1949 in Peoria, IL. He survives.

She was preceded in death by her parents, one infant son, one brother and one sister.

Mary worked as a clerk at the Roanoke and Eureka Pharmacies for over 32 years.

Funeral services will be held at 10:00 a.m. on Thursday, July 12, 2012 at Eureka United Methodist Church. Reverend Ron Martz will officiate. Visitation will be held on Wednesday, July, 11, 2012 from 5-8p.m. at Argo-Ruestman-Harris Funeral Home in Eureka. Burial will be at Olio Township Cemetery in Eureka.