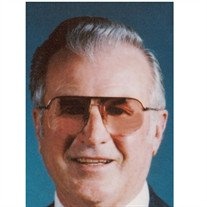 Melvin J. Martin, 91, of Eureka, IL passed away at 2:25 pm on Friday, September 4, 2015 at the Apostolic Christian Home of Eureka where he had been a resident.

He was preceded in death by his parents, one brother, and one great-grandson.

An Army veteran, Mel served his country with the European Theater during WWII.

He farmed in the Eureka area all his life. Mel was a past member of the Eureka Rotary and a Paul Harris Fellow. He served as trustee for Cruger Township for 30 years. He was a founding member of the Walnut Grove Running Club and was active in many civic organizations in Eureka. He also served as the Finance chairman for fund raising at Eureka Hospital.

Mel loved to golf and enjoyed getting together with his family, grandchildren, and great-grandchildren.

Funeral services will be held at 1:00 p.m. on Wednesday, September 9, 2015 at Argo-Ruestman-Harris Funeral Home in Eureka. Chaplain Frank Valente will officiate. Visitation will be held on Tuesday, September 8, 2015 from 10-11a.m. at the Apostolic Christian Home of Eureka and also from 5-7 p.m. on Tuesday at Argo-Ruestman-Harris Funeral Home in Eureka and from12:30-1p.m. on Wednesday, September 9, 2015 at the funeral home prior to services. Burial will be in the Roanoke Apostolic Christian Cemetery where military rites will be accorded at the grave.

The family would like to thank the staff at the Apostolic Christian Home, Dr. David Miller and UnityPoint Hospice for the special care provided to their dad.

Memorials may be made to the Apostolic Christian Home of Eureka. Online condolences may be sent to his family at www.argoruestmanharris.com.


To send flowers to the family or plant a tree in memory of Melvin J. Martin, please visit our floral store.

To send flowers to the family in memory of Melvin Martin, please visit our flower store.