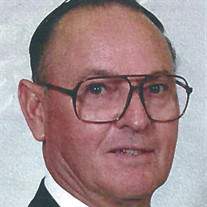 He was preceded in death by two brothers George and Frank Knapp and two sisters, Evelyn Walker, LaVina Schmeckpeper and one infant sister.

Michael was a Korean War Army veteran. He earned a Korean service Ribbon with two Bronze Service Stars, Defense service metal and a combat medal. He was honorably discharged as a Sergeant First Class.

Michael was a local grain and livestock farmer before moving his family to Ewing, MO. He farmed in the Ewing/Taylor, Mo area from 1975 to 2012 when he retired. He moved back to Eureka to enjoy his retirement. In his spare time he enjoyed woodworking. He was a member of the Goodfield, IL and Taylor, MO Apostolic Christian Church, where he served as a Sunday school teacher at both. Most of all, Michael enjoyed spending time with his family, especially his grandchildren and great-grandchildren.

Memorials may be made to the Apostolic Christian Home in Eureka.


To send flowers to the family or plant a tree in memory of Michael Knapp, please visit our floral store.

To send flowers to the family in memory of Michael Knapp, please visit our flower store.