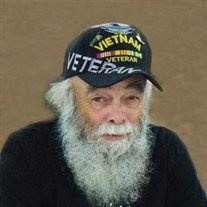 Mike Avery, 68, of Eureka, IL passed away at 10:28 p.m. on Friday, December 20, 2019 at UnityPoint Health Methodist in Peoria.
He was born on October 20, 1951 in Monmouth, IL a son of Edward Everett and Ruth Lucille Oaks Avery. He married Linda Sue Jones on January 17, 1976 in Gladstone, IL, at Gladstone United Methodist Church. She passed away on September 15, 2019.
Survivors include one brother, Terry (Carolyn) Avery of Gladstone, IL; one sister, Patricia Rankin of Raritan, IL; nephews and nieces, Scott (Jessica) Avery; Stacie (Joe) Hamblen; Pam (Larry) Gooding; Robert (Kim) Rankin; Brian (Christina) Rankin; Diana Rankin.
He was preceded in death by his parents.
Mike worked for the Peoria Postal Service and retired with 31 years of service.
Mike served in the United States Army for two years in Vietnam as a helicopter machine gunner receiving a Bronze and Silver Star. In May 2019, he went on the Honor Flight to Washington, D.C. with Pastor Dan as his escort.
He owned a Harley and was a member of a Harley Davidson Motorcycle Chapter for about 20 years. Later, he collected both model and full-size IH tractors and was a member of Red Power.
Mike was a dedicated Oakland Raiders fan. He was an avid fan of old-time country music.
Memorial services will be held at 10:00 a.m. on Saturday, January 11, 2020 at Liberty Bible Church in Eureka where military rites will be accorded at the church. Pastor Dan Waller will officiate. There will be no visitation. Cremation will be accorded. Argo-Ruestman-Harris Funeral Home in Eureka is handling arrangements for the family.
Memorial contributions may be made to United Methodist Church of Gladstone. Online condolences may be sent to the family at argoruestmanharris.com.


To send flowers to the family or plant a tree in memory of Mike Avery, please visit our floral store.

Please click here to view the video tribute
To send flowers to the family in memory of Mike Avery, please visit our flower store.