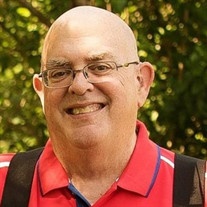 Milton graduated from Eureka High School, attended Midstate College, and was hired by Caterpillar Inc in 1968.  He was drafted into the US Army in 1969. After serving his country, he returned to Caterpillar Inc where he worked until his retirement in 2013. He was a member of the Eureka United Methodist Church, Eureka City Council, and the American Legion Post # 466. He was active in Scouting, coaching Little League and enjoyed bowling.

Milton was preceded in death by his parents.

A Celebration of Life will be held at 1:30 p.m. on Saturday, August 21, 2021 at the Eureka United Methodist Church. Pastor Ted A. Hartley will officiate. Immediately following the celebration of life family will have a reception of honor and remembrance of Milton at Eureka City Hall.

Funeral arrangements have been entrusted to Argo-Ruestman-Harris Funeral Home in Eureka.

Online tributes and condolences may be made at argoruestmanharris.com

To send flowers to the family or plant a tree in memory of Milton Ray Hinnen, please visit our floral store.

Please click here to view the video tribute
To send flowers to the family in memory of Milton Hinnen, please visit our flower store.