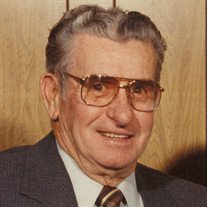 Milton Richard Leman, 97, of Eureka went to be with the Lord on Easter Sunday, April 16, 2017 at 2:04 pm at the Apostolic Christian Home in Eureka.

He was preceded in death by his parents, one daughter, Shirley Johns; four brothers, Walter, Ivan, Loren, Gerald; and one great-granddaughter, Alayna Gerst.

He was a lifelong farmer in the Secor area serving many years on the Secor Elevator Board and had served as a WWII Army medic in the Normandy Invasion and European Theater.

Milton was a member of the Eureka Apostolic Christian Church where funeral services will be held at 10:00 am on Friday, April 21, 2017. Church ministers will officiate. Visitation will be held on Thursday evening from 4-7 pm at the Ruestman-Harris Funeral Home in El Paso and from 9-9:45 am on Friday at the church before the service. Burial with military rites at the grave will be in Roanoke Apostolic Christian Cemetery. Argo-Ruestman-Harris Funeral Home in Eureka is assisting the family with arrangements.


To send flowers to the family or plant a tree in memory of Milton Leman, please visit our floral store.

Please click here to view the video tribute
To send flowers to the family in memory of Milton Leman, please visit our flower store.