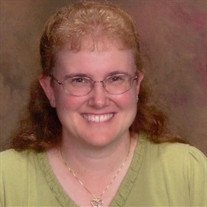 She was preceded in death by her father, paternal and maternal grandparents, mother-in-law Helen Swartz, and was shortly joined in Heaven by her precious daughter Holley.
Regina worked at Midwest Orthopedics in Peoria for 19 years. She attended Eureka United Methodist Church where she served in many different areas. She enjoyed crocheting, cooking, and baking and was known for her banana bread. Family was the most important gift to her and she loved to entertain and spend time with family and friends. Regina was a giving and selfless person, a devoted wife and mother, who always put others before herself. She will be remembered fondly and missed dearly by all who knew her.

To send flowers to the family or plant a tree in memory of Regina A. Swartz, please visit our floral store.

Please click here to view the video tribute
To send flowers to the family in memory of Regina Swartz, please visit our flower store.