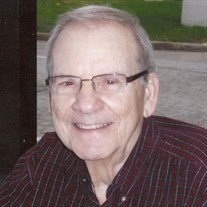 He was preceded in death by his parents and a brother, William Haecker.

Richard and his father owned and operated Haecker's Restaurant in Eureka for several years. He also was employed for the Woodford County Courthouse as a Bailiff. He was employed at Caterpillar for twenty-five years, retiring in 1983. After retiring, Richard volunteered at Advocate Eureka Hospital for many years. He served his country in the United States Army during WWII.

There will be no visitation or services. Cremation rites will be accorded and a private family burial will be held at a later date. Argo-Ruestman-Harris Funeral Home in Eureka is handling arrangements.

Memorial contributions may be made to Advocate Eureka Hospital. Online condolences may be sent to the family at www.argoruestmanharris.com.

To send flowers to the family or plant a tree in memory of Richard Haecker, please visit our floral store.

To send flowers to the family in memory of Richard Haecker, please visit our flower store.