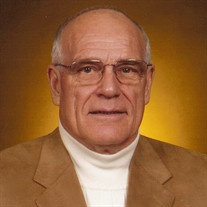 Eureka-Richard G. Lance, 76, of Eureka passed away peacefully surrounded by his family at 5:43 pm on Wednesday, March 4, 2015 at Unity Point Methodist Hospital in Peoria, IL.

He was born on August 8, 1938 in Brimfield, IL a son of John and Vivian Mae Cannon Lance. He married Jane E. Moreland in 1959 in Peoria, IL and they were happily married for the past 55 years, celebrating 56 years on March 7 of this year.

He was preceded in death by his parents, three brothers, and one sister.

Richard served his country in the U.S. Navy.

He was employed by the Nestle company in Morton for the past 10 years. He was a past president of the Eureka Jaycee's and served on the Eureka Rescue Squad. His first love was the Lord and he served as an adult Sunday school teacher at the Eureka Nazarene Church as well as serving as a trustee on the board.

A graveside service will be held at 3:00 pm on Saturday, March 7, 2015 at Olio Township Cemetery in Eureka. Argo-Ruestman-Harris Funeral Home is assisting the family with their arrangements.

In lieu of flowers, memorials may be made to the Eureka Food Pantry. Online tributes and condolences may be directed to the family at www.argoruestmanharris.com.

To send flowers to the family or plant a tree in memory of Richard G. Lance, please visit our floral store.

To send flowers to the family in memory of Richard Lance, please visit our flower store.