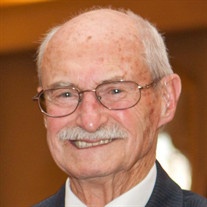 Richard Peacock, 94, of Eureka, formerly of East Peoria and Washington, passed away on August 26, 2019, at his residence. He was born on August 2, 1925, in Percy, IL, the son of Richard Davis and Freda (Willis) Peacock. He married Anna Mae Nichol on July 4, 1953, in Pekin. She preceded him in death on October 23, 2014.
He is survived by his children: Deanna (David) Gleisner of Hollywood, MD; Richard A. (Patricia) Peacock of Winston Salem, NC; Kim Stanfill of Lexington, TN; Susan (Alan) Zachary of Eureka; 1 brother: Jerry (Kay) Peacock of Benton, IL; 12 grandchildren and 16 great grandchildren.
Richard was preceded in death by his parents and 1 son-in-law, Doug Magnuson.
His family was the most important part of his life. He was an avid dancer specializing in the arts of ballroom, square, round, and line dances. He enjoyed fishing, camping, and traveling the world with his wife. Richard and Anna made their home in Eureka during the summer months and continued their active lifestyles in Mesa, AZ, during the winters.
As a young man he enlisted in the Army Air Corps during WWII where he flew 50 missions out of Italy as a Ball Gunner with the "Waller Crew". Richard was awarded 4 Bronze Stars for his service. After the war he attended Southern Illinois University where he obtained his Bachelor's degree and went on to work in Defense Products at Caterpillar.
Funeral services will be at 3 pm on August 30, 2019, at Argo-Ruestman-Harris Funeral Home in Eureka, IL. His son Richard A. Peacock will officiate the service. Visitation will be one hour prior to the services at the funeral home. He will be laid to rest in Olio Township Cemetery with Military Honors following the service.
Online tributes and condolences may be made at argoruestmanharris.com. Memorials may be directed to the Greater Peoria Honor Flight.


To send flowers to the family or plant a tree in memory of Richard L Peacock, please visit our floral store.

Please click here to view the video tribute
To send flowers to the family in memory of Richard Peacock, please visit our flower store.