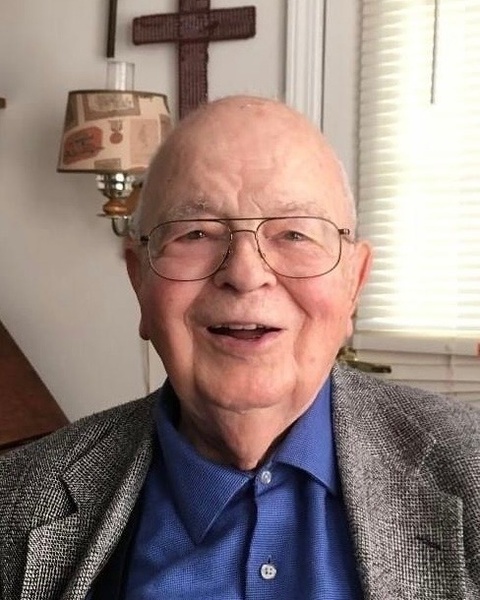 Born May 7, 1925 to Frank and Esther (Schertz) Harnish, he grew up in Eureka, Illinois and went on to marry Ruth Martin in Harrisonburg, Virginia on June 9, 1951.

He was preceded in death by his parents, one brother, David, three sisters, Suzanne, Marjorie, and Patricia, and his beloved wife, Ruth.

Bob, as he was known to many, grew up on a farm in Eureka and attended a one-room schoolhouse, where his favorite activities included playing softball and games like Andy Andy Over. By high school, his interests had shifted to ping pong and tennis and, at one point, he crafted a tennis court on the lawn at home. He found deep joy in spending time with his family, cousins and friends.

In his mid 20s, Bob received a call to ministry, attended and graduated from Goshen College, met and married Ruth Martin, started a family and began his life’s work as a pastor in the Mennonite Church. Over the years, he pastored congregations in several central Illinois communities — East Peoria, Flanagan and Eureka. Later in life, he served as chaplain for many years at Maple Lawn Homes in Eureka.

His style as a pastor was characterized by a keen interest in individuals and love of Jesus, a down-to-earth manner and sense of humor and a deep acceptance and faith that although we are all wounded, God loves us no matter what. These fundamental beliefs shaped his lifelong friendships and encouraged others to live in faith and thankfulness to God.

In addition to his work as a minister, Bob made time to tend to an amazing garden and maintain close contact with his children and grandchildren, who knew that every year – no matter their age – he would call and sing them a lively rendition of “Happy Birthday to You.” In his later years, Bob’s daily care of his wife Ruth, who had Alzheimer’s, included visiting and spending time with her, feeding her at each meal, and praying a blessing over her each night. His steady selflessness and love touched many hearts.

“He was such a wonderful, compassionate, faithful man who was such an encouraging light to so many,” one friend recalled. “He will be missed, but he will always be remembered for his faith, his commitment to kindness and reconciliation and his warm and gentle spirit.”

The family wishes to thank the staff of the Apostolic Christian Home of Eureka for their kind and compassionate care.

Memorials may be made to any of the following: Roanoke Mennonite Church, Mennonite Central Committee, Goshen College or Mennonite Education Agency.

To send flowers to the family in memory of Robert L. Harnish, please visit our flower store.