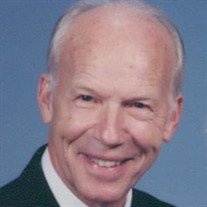 Robert "Bob" R. Hurst, 95, of Peoria, formerly of Eureka, IL passed away at 9:40 a.m. on Tuesday, July 30, 2019 at UnityPoint Health Proctor Hospital in Peoria.
He was born on October 10, 1923 in Princeton, IN a son of Verner and Mae Ellen Saatkamp Hurst. He married Wilma R. Reeder on December 8, 1945 in Chester, PA. She passed away on July 7, 2009.
Survivors include one daughter, Dr. Jane Hurst Velez of Peoria, with whom he lived the last year of his life; five grandchildren, Lisa Hale Charkatz, Christian Galladora, Robert H. Velez, Courtney Velez, and Sarah Velez Howard (Scott); seven great grandchildren, Locke and Lourdes Howard, Gabriel "Bear" and Skylar Garza-Velez, Zoe and Ian Galladora, Hannah Charkatz. Becky Reardon (Maggie Gonzales), Taos, NM. Connie Hippensteel (Barry), Anderson, IN. Kathleen Ramsey (George), Indianola, WA. Dr. Gene Reardon (Ina Takashima) , Auburn, Ohio..
He was preceded in death by his parents, one son, Richard Hurst; one brother, James Hurst and one sister, Geraldine Reardon.
In 1944, Robert graduated with Honors from Anderson University in Anderson, Indiana. While at Anderson, he was Senior Class President and his future wife was The May Queen. He earned a Master's Degree at Butler University, and was ABD on his Doctorate in School Administration from New York University.
Robert proudly served his country in the United States Navy from 1944 to 1946. While in the Navy, he was on the U.S.S. Arkansas during World War II, and was voted first out of 144 Commissioned Officers as "most likely to succeed in a military career." `
Mr. Hurst, as he was known in class, taught Algebra, Geometry, and Trigonometry at Evanston Township High School in Evanston, Illinois from 1948 until 1986, and was also Head of the Mathematics Department.
Robert was a Chicago Cubs fan since moving to Evanston where he lived during his teaching career. He attended Winnetka Bible Church while in Evanston, and Liberty Bible Church after moving to Eureka in 1999. He enjoyed studying the Bible and studying scripture, praying, and volunteer work. He started the chimes choir at Maple Lawn Homes where he often led the weekly Hymn Sing. He also volunteered for Meals on Wheels, the Gideon's, the Alzheimer's wing at Maple Lawn Homes in Eureka. Robert also met with victims and offenders as a volunteer mediator for the Woodford County Victim-Offender Mediation Program.
Robert was loved and respected by all who know him. He has been a role model for his children and grandchildren, for students and friends who know him, and especially those close to him. Family and friends have many stories that speak to his character.
Robert attended Liberty Bible Church in Eureka where a memorial service will be held at 6:00 p.m. on Tuesday, August 6, 2019. Pastor Tom Zobrist will officiate. There will be no visitation. Graveside services will be held at 3:30 on Tuesday, August 6, 2019 at the Stewart Harmony Cemetery in Metamora where military rites will be accorded at the grave. Argo-Ruestman-Harris Funeral Home in Eureka is handling arrangements.
Memorial contributions may be made to Liberty Bible Church. Memories and comments can be left online those who knew Bob at www.argoruestmanharris.com.


To send flowers to the family or plant a tree in memory of Robert Hurst, please visit our floral store.

To send flowers to the family in memory of Robert Hurst, please visit our flower store.