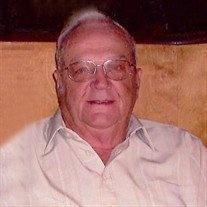 EUREKA- Robert D. Wilder, 77, of Washington, formerly of Eureka, died at 12:10 pm on Saturday July 4, 2015 at his residence in Washington.
Memorial Service will be held at 6 pm on Wednesday July 8, 2015 at Argo-Ruestman-Harris Funeral Home in Eureka. Pastor Jennie Churchman will officiate. Visitation will be from 4pm until the time of service at the funeral home. Cremation rites have been accorded and burial of cremains will be in Olio Twp Cemetery at a later date.
He was born in Lincoln, IL on December 31, 1937, a son of the late Lon and Myrtle Wilder. He married his wife of 57 years, Geraldine "Gerry" Curfman in Eureka on August 3, 1957. She survives.
Also surviving are his son, Mark ( Lori) Wilder, Eureka; 3 daughters, Pam (Jim ) Rampy, Eureka; Jackie (Charles) Ashe, Land O Lakes, FL; Karen (Robert) Clark, Cypress, TX; 8 grandchildren; 1 great-granddaughter; and 2 brothers, Gary (Toni) Wilder, and Gerald "Whitey" ( Judy) Wilder, Washington.
He was preceded in death by 5 sisters and 1 brother.
Bob served in the United States Army from 1961-1963.
After retiring from Caterpillar in 1989, he truly enjoyed helping farmers in the area. While he and Gerry lived in Arizona, Bob became an avid golfer. He also enjoyed fishing as well as gardening.
Memorials may be given to Loyola Transplant Center, Chicago, IL.
Online condolences may be directed to his family at www.argoruestmanharris.com


To send flowers to the family or plant a tree in memory of Robert "Bob" Wilder, please visit our floral store.

Please click here to view the video tribute
To send flowers to the family in memory of Robert Wilder, please visit our flower store.