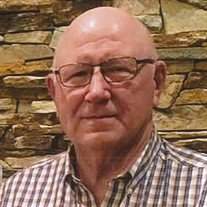 Roger Kenneth Braman, 73, of Eureka passed away on June 3, 2018 at 1:05pm after a courageous battle with cancer at his residence.
He was born on August 31, 1944 in McDougal, AR to Ida Lee Braman. He married Alice Ulfers on April 5, 1969 in Gibson City, IL. She preceded him in death on August 1, 2012.
Roger is survived by two sons Greg (Rachel) Braman of Roanoke; Matt (Amy) Braman of Washington; one brother Jerry (Janet) Keller of East Peoria; one sister Tammie (Mike Lamb) Forcum of East Peoria and five grandchildren Brooke, Luke, Holly, Grace and Calin.
He was preceded in death by his parents and two brothers Robert Keller and Rick Keller.
He served in the United States Army during the Vietnam War. He worked and retired from Caterpillar after 35 years in the Morton Facility.
He enjoyed coaching his boys in biddy basketball and little league baseball, watching sports, and reading. He really enjoyed attending his grandkids events.
A visitation is scheduled at Argo-Ruestman-Harris Funeral Home in Eureka, on Thursday June 7, 2018 from 5pm to 7pm. Funeral service will be held on Friday June 8, 2018 at the funeral home starting at 10:30am. There will be a visitation held 1 hour prior to the service. Burial will follow at Olio Township Cemetery. Reverend Frank Valente will officiate.
Memorial contributions may be made in Roger's memory to Life Points of Morton or to the Roanoke Apostolic Home. Online tributes and condolences may be made at argoruestmanharris.com.


To send flowers to the family or plant a tree in memory of Roger K. Braman, please visit our floral store.

Please click here to view the video tribute
To send flowers to the family in memory of Roger Braman, please visit our flower store.