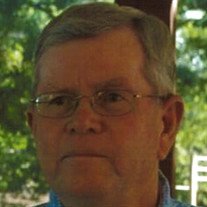 He was also preceded in death by his father Everett P. Wilson and his grandparents.

Roger was a U.S. Army veteran serving his country from August on 1965 to August of 1967 in Vietnam.

After working as a truck driver for Allied Van Lines he retired and decided to work as a custodian for District 140 until his retirement. Roger was a member of Eureka Presbyterian Church, Eureka Sportsman's Club and American Legion Post # 466 in Eureka.

A funeral service will be held at 11 a.m., Thursday, September 28, 2017 at Eureka Presbyterian Church. Pastor Bob Montgomery will officiate. Visitation will be one hour prior to services at the church on Thursday. Burial will be in Olio Cemetery. Argo-Ruestman-Harris Funeral Home is assisting with arrangements.

Memorials may be made to Eureka Presbyterian Church, Eureka Sportsman's Club or American Legion Post # 466 in Eureka.

To send flowers to the family or plant a tree in memory of Roger E. Wilson, please visit our floral store.

To send flowers to the family in memory of Roger Wilson, please visit our flower store.