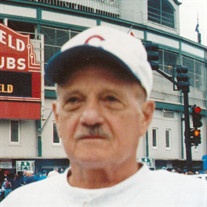 He was preceded in death by his parents and one brother, Billy James Bates.

Ronnie attended Normal University High School. He served his country in the US Army from 1947-1949 in Guam/Iwojima.

He was a proud union worker with the Laborers Local #362 in Bloomington, IL. Ronnie served a term as secretary/treasurer for business manager Paul Penn. He retired after 25 years with the Ironworkers Local #112 in East Peoria, IL.

Ronnie loved his wife, children, and grandchildren. He enjoyed golfing and was a huge Cubs, Bears, and Nascar fan. He was a tough, fair, and generous man. He enjoyed sharing time, beer, and making wagers with his many friends most recently up and down Meadows Avenue in East Peoria. Ronnie will be remembered and missed by all.

Visitation will be held on Thursday, November 3, 2016 from 1-3 pm at the Argo-Ruestman-Harris Funeral Home in Eureka. A graveside service will follow the visitation at Olio Township Cemetery in Eureka.

Ronnie's family would like to give a special thank you and extend their appreciation for the kind and professional care he received from the fine surgical staff, ICU, and hospice staff at Unity Point Health-Methodist.

Memorials may be directed to the Unity Point Health-Methodist Hospice. Online condolences may be sent to the family at www.argoruestmanharris.com.

To send flowers to the family or plant a tree in memory of Ronald "Ronnie" Bates, please visit our floral store.

Please click here to view the video tribute
To send flowers to the family in memory of Ronald Bates, please visit our flower store.