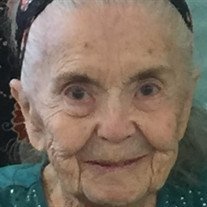 Shirley Owen, 97, of Eureka, IL passed away at 1:05p.m. on Saturday, January 12, 2019 at the Apostolic Christian Home of Eureka.
Shirley was born on February 18, 1921 in Rocheport, MO a daughter of Woodson Eldon and Della Marie Jennings Stemmons. She married Carter Owen, Jr. on June 25, 1938 in Columbia, MO. He passed away on September 11, 1997.
Survivors include her daughter, Mary Sue Waibel of Remington, IN; brother, Perry (Helen) Stemmons of Columbia, MO; six grandchildren, Sheri (Scott) Irwin of Hampshire, IL; Marc (Christine) Williamson of San Antonio, TX; Lee (Jodie) Waibel Wolcott, IN; Judy (Mike) Mangold of Eureka, IL; Neil ( Jill) Waibel of Westfield, NJ; John Waibel of Remington, IN; 18 great grandchildren; seven great great grandchildren.
She was preceded in death by her parents and one daughter, Judy Williamson.
Shirley was a secretary for Carter Owen, Jr construction company that her husband owned.
She attended the Eureka Christian Church and also was a member of the First Christian Church in Columbia, Missouri.
Funeral services will be held at 4 p.m. on Wednesday, January 16, 2019 at Argo-Ruestman-Harris Funeral Home in Eureka. Rev. Jennie Fisher will officiate. Visitation will be held from 3:30-4 p.m. on Wednesday prior to the funeral services at the funeral home. Burial will be in Mount Pleasant Cemetery in New Franklin, Missouri. Argo-Ruestman-Harris Funeral Home in Eureka is handling arrangements for the family.
Memorial contributions may be made to the Apostolic Christian Home of Eureka. Online condolences may be sent to the family at argoruestmanharris.com.


To send flowers to the family or plant a tree in memory of Shirley Owen, please visit our floral store.

To send flowers to the family in memory of Shirley Owen, please visit our flower store.