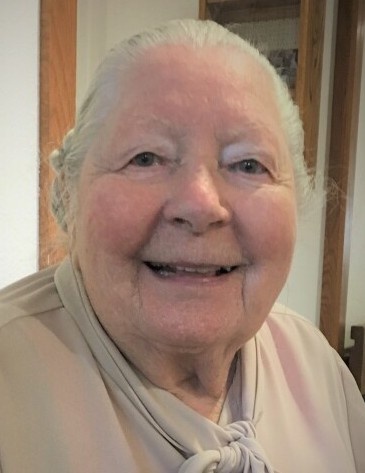 Palo Alto, CA - Shirley Florence Reeser Schulthes, 98, passed away peacefully in the morning on August 28, 2021 at Palo Alto Commons, where she lived in Palo Alto, CA.

Shirley was born April 15, 1923 at Eureka, IL, the oldest daughter of Christian and Amelia Hartman Reeser.  Shirley married Vernon Schulthes on February 27, 1943, in Benson, IL, and they were married for 68 years, until Vernon’s death in 2011.

Shirley attended grade school in Benson, was a graduate of Benson Community High School and Brown's Business College in Peoria.  She operated a business machine in the Peoria office of Thomas and Clarke, in the Eureka branch of the federal Office of Price Administration, and in the Office of Safety Engineering at Aberdeen Proving Ground, Maryland.  She was a partner with her husband in their jewelry store and watch repair business in Roanoke, IL from 1946 to 1952.  Shirley enjoyed music and art, learned piano as a young child, and enjoyed playing the accordion.  She loved learning, read widely, and enjoyed traveling.

Shirley and Vernon resided in Eureka after their marriage, moving to Aberdeen, MD during World War II, where Vern was stationed, then returned to Roanoke where Vern continued to work for Caterpillar while they started their jewelry business.  In 1952, Shirley and Vernon moved to Milwaukee, WI with Caterpillar and lived there many years.  They also lived in Newcastle-Upon-Tyne, England for five years, and Shirley enjoyed the chance to visit Great Britain and Europe with her family.  In 1971, Shirley and Vernon returned to live in Eureka, and in 2011, after Vern passed away, Shirley moved to Palo Alto, CA to be near her daughter and family. While she lived there, she became a great-grandmother, and it made her very happy to see the little ones.

A celebration of Shirley’s life will be held on Thursday, September 9, 2021 at 11 AM at the Argo-Ruestman-Harris Funeral Home with Jennie Churchman officiating.  There will be a Visitation at 10 AM prior to the service. Services will be livestreamed at www.facebook.com/Argo-Ruestman-Harris-Funeral-Home-136178893098783/ . Burial will be at Olio Township Cemetery in Eureka.

Memorial contributions can be made to the Eureka-Goodfield Fire Protection District. Online condolences can be sent to family at argoruestmanharris.com.

To send flowers to the family in memory of Shirley Schulthes, please visit our flower store.