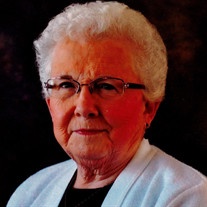 Shirley M. Tate 88, of Eureka (formerly of Metamora) passed away on May 31, 2019 at the Eureka Apostolic Christian Home. She was born on August 21, 1930 in Stark County, IL to the late Louis and Winifred (Turnball) Cinnamon. She married Dean Packard on June 5, 1949 in Toulon, IL. He preceded her in death on January 16, 1989. She later married Nelson "Red" Tate on January 19, 1991 in Metamora, IL. He preceded her in death on October 11, 2004.
She is survived by 3 daughters: Sherri (Dan) Lucas of Mt. Vernon, Deanna (Howard) Harms of Roanoke, Helen Packard (Bobby Roe) of Washington; 3 grandchildren and 5 great grandchildren.
Shirley was preceded in death by 1 brother: Cecil Cinnamon; 3 sisters: Grace Cinnamon, Lucille Frain, Genevieve Pyle and 1 grandchild: Michael Harms.
She was a member of Christian Union Church in Metamora. Shirley worked for the First Bank of Eureka for many years. She enjoyed playing golf and loved to sew.
A graveside service will be held on Monday June 3, 2019 at 1pm at Olio Township Cemetery. Pastor Gary Salm will officiate. Argo-Ruestman-Harris Funeral Home is assisting the family with the arrangements.
Memorial contributions may be made to the Apostolic Christian Home of Eureka or to Christian Union Church. Online tributes and condolences may be made at www.argoruestmanharris.com.

To send flowers to the family or plant a tree in memory of Shirley M Tate, please visit our floral store.

To send flowers to the family in memory of Shirley Tate, please visit our flower store.