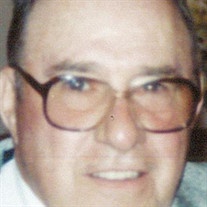 Smith Henry Rakestraw, 79, of Eureka, IL formerly of Roanoke, Goodfield and Tremont, IL passed away at 5:40 am on Friday, September 18, 2015 at Maple Lawn Health Center in Eureka.
He was born on September 25, 1935 in Pekin, IL and raised in the Spring Lake and Manito area.He was a son of Smith P. and Lucille Knaack Rakestraw. He married Boneita L. Washer on February 15, 1974 in Goodfield, IL. She survives.
Also surviving are his children, Susan (Eddie) Hart of Burlington, IA; William (Kim) Rakestraw of Roanoke, IL; Margie (Rob) Craig of Morton, IL; Heidi (Jeff) Schreiner of Burlington, IA; Smith "Tig" (Pam) Rakestraw of Uniontown, PA; stepchildren Timothy (Co) Miltenberger of Morton, IL; Amy (Doug) Meiner of Washington, IL; two sisters Linda (Ralph) Brooks of Sun City, AZ; Barbara (Gene) Bradford of Fredrickton, Canada; eighteen grandchildren, seven great-grandchildren, five step grandchildren, and one step great-grandchild.
He was preceded in death by his parents and two brothers, William and Dale Rakestraw.
An Air Force & Army veteran, he served his country for three years in Germany. Smith retired from Caterpillar in Morton in June of 1995. He was a member of the Roanoke Art League.
He enjoyed mushroom hunting, oil painting, sculpting, and fishing. He was well-known for being a die hard St. Louis Cardinals fan.
Funeral services will be on Sunday, September 27, 2015 at 3p.m. at Memorial Hall at Maple Lawn Health Center in Eureka.Pastor Doane Brubaker will officiate. Visitation will be from 4-6 p.m. on Saturday, September 26, 2015 at Argo-Ruestman-Harris Funeral Home in Eureka. Burial will be in Olio Township Cemetery in Eureka where military rites will be accorded at the grave.
Memorials may be made to the Alzheimer's Association in Peoria.
Online tributes and condolences may be made at www.argoruestmanharrisfuneralhome.com.

To send flowers to the family or plant a tree in memory of Smith Henry Rakestraw, please visit our floral store.

To send flowers to the family in memory of Smith Rakestraw, please visit our flower store.