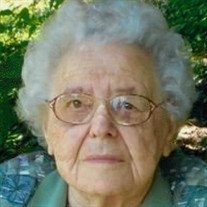 She was preceded in death by her parents, two brothers, and one sister.

Velda was a school teacher during WWII and she was a homemaker living on the family farm.

Velda volunteered at the Eureka Hospital and Maple Lawn for many years. She was an avid reader who enjoyed a good book.

She was a member of the Roanoke Mennonite Church where she was active in her earlier years.

Funeral services will be held at 10:30 am on Monday, December 12, 2016 at the Roanoke Mennonite Church. Pastor Phil Bachman will officiate. Visitation will be held on Sunday from 2-4 pm at the Argo-Ruestman-Harris Funeral Home in Eureka and from 10-10:30 on Monday before the service at the church. Private family burial will be at Roanoke Mennonite Cemetery.

Memorial contributions may be made to Advocate Hospice or Peoria Rescue Ministries.
Online tributes and condolences may be made at www.argoruestmanharris.com.

To send flowers to the family or plant a tree in memory of Velda Householter, please visit our floral store.

To send flowers to the family in memory of Velda Householter, please visit our flower store.