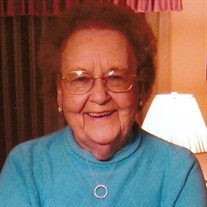 She was preceded in death by her parents, three brothers, and three sisters.

Vi and Virg owned the Ben Franklin variety store in Eureka for many years.

A private family grave side service will be held on Saturday, March 28, 2015 at Olio Township Cemetery in Eureka.

Memorial contributions may be made to the Eureka Apostolic Christian Nursing Home.

Argo-Ruestman-Harris Funeral Home in Eureka is assisting the family with their arrangements. Online condolences may be sent to the family at www.ruestmanharrisfuneralhome.com.

To send flowers to the family or plant a tree in memory of Viola "Vi" E. Chambliss, please visit our floral store.

To send flowers to the family in memory of Viola Chambliss, please visit our flower store.