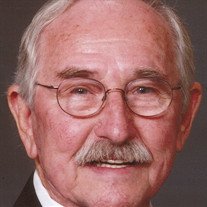 Bloomington- W. Clay McDaniel, 90, of Bloomington, IL passed away at 6:10 p.m. on Monday, November 6, 2017 at OSF St. Joseph Medical Center in Bloomington. He was surrounded by his loving daughter, Kimberly, his precious granddaughters Katie Schmeltz and Kristina Ferguson and his precious grandson Kevin Backus, grandson Micah Andrews and great-granddaughter Samantha Andrews throughout his last few days/hours.

He was preceded in death by his parents, two brothers, Carroll and Don, a sister, Lillierose, an infant sister Kathleen, and one grandson, Joseph Patrick LaBarre.

Clay was a Navy Veteran proudly serving his country during WWII. He was also a member of the International Brotherhood of Boiler Makers, Iron Ship Builders and Helpers of America building the ship which he departed on to the Western Pacific as part of the Navy's "Magic Carpet" fleet. Clay was a lifetime member of the VFW and the American Legion.
He was a factory representative & manager for various steel corporations worldwide. He was also a master of many trades throughout his life.

Clay was a past Master of the Masonic Lodge 306 in Eureka. He was a member of the Taylor Lodge in Washington, Grand Chapter Order of the Eastern Star of Illinois and Scottish Rite Peoria Consistory.

Clay never knew a stranger and had an ever present sense of humor which his family loved.

Funeral services will be held at 12 noon on Saturday, November 11, 2017 at Argo-Ruestman-Harris Funeral Home in Eureka. Rev. Wes Ooms will officiate. Visitation will be held on Saturday from 10-12 at the funeral home before the services. Burial will be in Olio Township Cemetery where military rites will be accorded at the grave.

The family would like to express their heartfelt gratitude to Dr. Jack Spaniol and Dr. Ji Li for their very special care of him.

In lieu of flowers, memorials can be made to the Shriners Children's Hospital. Online condolences and tributes may be sent to the family at www.argoruestmanharris.com.

To send flowers to the family or plant a tree in memory of W. Clay McDaniel, please visit our floral store.

To send flowers to the family in memory of W. McDaniel, please visit our flower store.