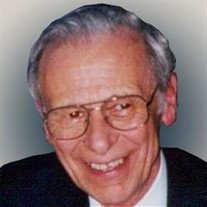 William A. "Bill" Ruder, Sr, 86, of Eureka, IL passed away at 1:20 p.m. on Friday January 17, 2020 at the Illinois Veterans Home in Manteno, IL.
He was born on July 8, 1933 in Lowpoint, IL a son of Reynold and Frances Elbert Ruder. He married Lynnette M. Hodel on March 21, 1975 in Eureka, IL. She passed away on September 10, 2016.
Survivors include his children, William Ruder, Jr of Waterloo, IA; Phyllis(Dick) Hermann of Fort Myers, FL; Brad(Esteline) Ruder of Crossville, TN; Bruce (Teresa) Ruder of Eureka; Bryant (Joanie) Ruder of East Peoria; Patty Bonczkowski of Deer Creek; Brent Ruder of Plainfield, CT; Scott (Gena) Thompson of Eureka; Douglas Thompson of Edwardsville, IL; Jeffrey (Suzi) Thompson of Roanoke; one sister, Ellen (Jay) Mitchell of St. Louis, MO; 20 grandchildren; 14 great grandchildren.
He was preceded in death by his parents, three brothers and one sister.
Bill served his country in the United States Navy during the Korean Conflict.
He was a member of the Knights of Columbus in Metamora, IL and the American Legion Post #466 in Eureka.
Bill was a member of St. Patrick's Catholic Church in Washington where a memorial mass will be held at 10:30 a.m. on Friday, January 24, 2020. Father John Steffen will officiate. Visitation will be held from 9:45-10:30 a.m. before the services at the church on Friday. Cremation will be accorded. Burial will follow the services at Olio Township Cemetery in Eureka where military rites will be accorded at the grave. Argo-Ruestman-Harris Funeral Home in Eureka is handling arrangements for the family.
Memorial contributions may be made to the Illinois Veterans Home in Manteno, IL or Ronald McDonald House in Peoria. Online condolences and tributes may be sent to the family at www.argoruestmanharris.com.


To send flowers to the family or plant a tree in memory of William A. "Bill" Ruder, please visit our floral store.

To send flowers to the family in memory of William Ruder, please visit our flower store.