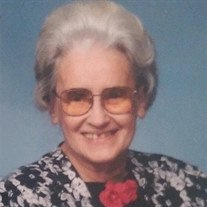 Eureka- Wilma R. Blunier, 88, of Eureka, IL formerly of Mahomet, IL went to be with her Lord and Savior at 1:10p.m. on Monday, August 15, 2016 at OSF St. Francis Medical Center in Peoria with her loving family by her side.

She was born on October 31, 1927 in Fairbury, IL a daughter of Joshua and Lucy Anliker Kempf. She married Benjamin Blunier on January 11, 1948 in Eureka and they were married for 68 years. He survives.

She was preceded in death by her parents, one brother, and one sister.

Wilma was a nurse's aide in Champaign, IL for many years.

Wilma was a devoted wife, mother and grandmother and will be dearly missed by her family.

Wilma was a member of the Eureka Apostolic Christian Church where funeral services will be held at 10:00 a.m. on Thursday, August 18, 2016. Church ministers will officiate. Visitation will be held from 5-8 p.m. on Wednesday, August 17, 2016 at Argo-Ruestman-Harris Funeral Home in Eureka and from 9-9:45 a.m. at the church prior to the services on Thursday. Burial will be in the Roanoke Apostolic Christian Cemetery.

Memorial contributions may be made to the Eureka Apostolic Christian Home. Online condolences and tributes may be sent to the family at www.argoruestmanharris.com.


To send flowers to the family or plant a tree in memory of Wilma R. Blunier, please visit our floral store.

To send flowers to the family in memory of Wilma Blunier, please visit our flower store.